The Port of Burntisland 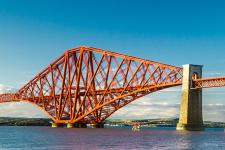 The Port of Burntisland, between Kirkcaldy and North Queensferry, is one of the oldest natural harbours on the Forth, and provides transport and distribution by sea, rail or road all over Scotland. The renewable energy sector along with an upturn in coastal shipping has provided something of a revival for the port, which is also home to Burntisland Fabrications and Briggs Marine.

In the 21st century Burntisland can enable access for barges of 300ft by 90ft, and the port has been a major Scottish port for centuries, a position which was boosted in 1847 with the Edinburgh and Northern Railway which ran from Burntisland north to Lindores and Cupar. Three years later, the world's first roll-on/roll-off rail ferry service was launched, and was crossing the Firth of Forth from Burntisland to Granton. The service was operational until the Forth Bridge was opened in 1890 when the Forth Bridge opened.

In 2014, Forth Ports Limited and Fife-based Scott Group announced investment into a proposed regeneration of the eastern end of the port. Forth Ports and Scott Group, supported by a Regional Selective Assistance (RSA) grant from Scottish Enterprise, promised to invest around £2.5million in the development of the site, with a view to creating what they called a ‘state-of-the-art pallet manufacturing facility’ – which would include upgrades to the electricity supply, a refurbishment of the existing building and other areas, upgrades to road infrastructure and relocation and installation of new equipment.

For information about Burntisland and other ports we serve at t ward shipping limited, contact us and we’ll be delighted to advise you.